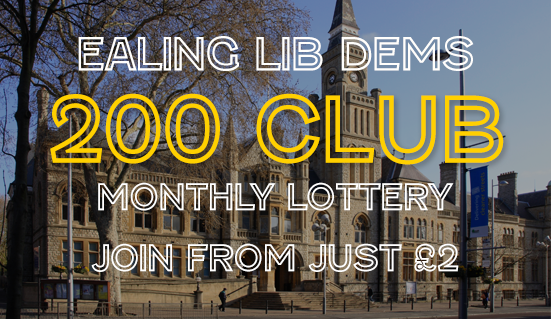 Are you a loyal supporter of the party? Why not support us regularly, and be in with the chance of winning hundreds of pounds, by joining our monthly lottery, the 200 Club. Open to all paid-up party members, the draw is done monthly, with an annual superdraw at the end of the year.

At the 2015 Christmas draw one member won £739! And the more people who play, the bigger the prize fund.

What is it?
A savings club to raise funds for local campaigning. It enables members to donate regularly to the party whilst having the opportunity of winning big prizes. Many local Lib Dem parties run similar clubs.

How does it work?
Party members buy ‘shares’ via monthly standing orders. Half of the money received each month goes to campaign funds – the balance is added to the prize fund. 50% of this prize fund is awarded on a monthly basis and the other 50% is saved for an annual prize to be paid in December.

What is the value of the annual prize?
This depends on the amount of money donated, but the December prize has, in recent years, been as high as £739.

Why the name?
The name is based in the typical number of shares taken out by members. Whilst at its launch, there were only 100 shares, in recent years, typically, there have been around 200 shares.

If you have any questions, just contact David Zerdin using 200club@ealinglibdems.org.uk