It is also reported that the council has removed a requirement to carry out an "expensive review" of new CPZ schemes after one year.

Our companion story illustrates the poor planning in this area. A new CPZ has caused chaos on busy Scotch Common. It has also created additional parking problems in the area north of Pitshanger Lane; already identified by the council as being under pressure. Liberal Democrat candidate Francesco Fruzza (picture left) said, "If this is an example of Labour council planning it is no wonder we are in a mess." 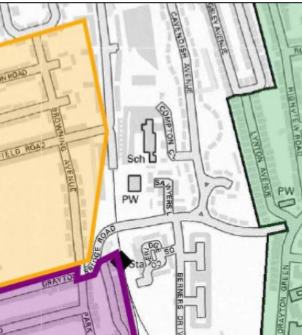 Take another example of poor planning (right).  This is the area just north of Drayton Green station where a CPZ is planned. The purple area is the inner zone and the yellow area the outer zone. The green area is an existing CPZ.

What will happen in  Cavendish avenue, Berners Drive etc when this goes ahead? Francesco commented, "These people are going to be the meat in the sandwich."

No prizes for guessing that they will be forced to have their own CPZ. And so it spreads.

Check out the plan yourself to see if you are next.

The Local Lib Dems believe that parking should be resident-led, but properly planned as a whole.  And the whole process should be more transparent. Did your councillor represent you? only 18 from 51 councillors responded as quoted from their own documents below:

Officers wrote to each of the Councillors of those Wards where consultations are proposed. Councillors were provided with the plans relevant to their Ward and asked for their comments on the proposals.

The libdems believe in local democracy  and would look for residents to lead on parking consultations. Tell us and we will champion your views.