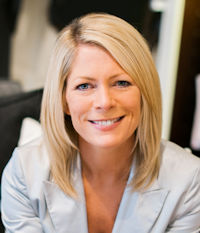 Jo is a mum of twin girls and moved to Ealing from Oxfordshire. 'Many people move out of London to Oxford but we love Ealing, it is the best of all worlds with it's diverse community and wonderful mix of beautiful parks, thousands of trees and all the benefits of a thriving town. We cycle everywhere and creating a safe environment for families in Ealing is a priority for me'.

Jo has her own consulting businesss in image and colour. Jo also teaches at the London College of Style and volunteers at the LOC oncology clinic in Harley Street.

She previously worked as a police officer in Bristol, her home city, where one of her roles was as a community beat officer. She has a strong belief in building connections in communities to collaboratively solve problems. She also plays golf and loves California.

Jo's inspiration to join the party? 'I was so moved fby the emotional tribute from Brendan Cox, shortly after Jo's death, listening to his incredible humility and forgiveness. He gave a plea for more women and mothers like Jo to become involved in politics and not to be put off by what had happened so that's why I'm here'.