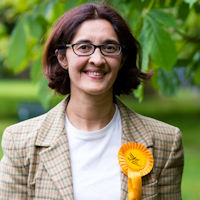 It was fun meeting with shoppers around Ealing, talking to them about the issues that concerned them the most. Older voters spoke with disMay about the Tory abandonment of the commitment to the Triple Lock, clearly a worry for those who have worked hard their whole lives. This was compounded by disbelief on the announcement of the Social Care policy by the Conservatives. Parents spoke about their reality of being asked by school to pay towards school supplies such as books, and their sadness at seeing teachers being made redundant.

Speaking to our younger voters about Liberal Democrat values, we spoke particularly about our passionate belief in internationalism, a belief in the importance of upholding international law, and how we are stronger when we unite with other countries.

I have been personally so touched by the warmth and the enthusiasm of our newer supporters. I loved the parents who were convinced by their Liberal Democrat children to get involved in the campaign, who I now count as firm friends! I was delighted with the confidence of our newest Focus Team member, Athena Zissimos, joining stalwart Cleveland campaigner, known to so many of you already, Francesco Fruzza. I am always blown away by the technical expertise from such a wide variety of backgrounds of our supporters, and again we have had new friends join us with such a depth of skill in a wide range of areas, and so humble! I won’t mention names here, but I hope they know who they are, constantly encouraging me, sharing my posts on social media, introducing me to friends, offering all sorts of help and advice.

Thank you so much!