What the fox? Jon Ball joins Vinny the Fox Cub to pledge support for a cruelty free future 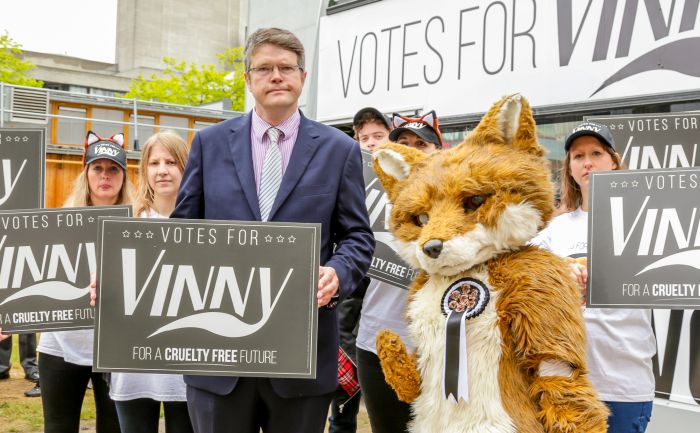 Vinny the Fox Cub was today joined by Jon Ball, Liberal Democrat parliamentary candidate for Ealing Acton and Central, and supporters from the League Against Cruel Sports, to launch a Battle Bus tour of Great Britain.

Vinny has three key policies and will be asking election candidates from all parties if they will:

Jon Ball signed up to the campaign and said, "Theresa May's proposal to end the ban on fox hunting is the latest sign that she is turning the Conservative Party into a copy of UKIP. If elected, I will always vote to ensure that the barbaric practice of hunting remains banned and that illegal hunting and other animal cruelty is punished severely."

Eduardo Goncalves, Chief Executive of the League Against Cruel Sports which is supporting Vinny’s campaign, said: “Britain is meant to be a nation of animal lovers but right now a lot of animals are feeling unloved. There are moves to legalise the hunting of foxes, deer and hares, over ten years after the nation recognised that it is nothing but a cruel sport. Dog fighting is happening right here on our streets; and those people who inflict cruelty on animals get barely a slap on the wrist."

Eduardo Goncalves added: "The League Against Cruel Sports has issued an Election Manifesto which includes commitments on a range of animal welfare issues, including hunting, dog fighting, ‘gamebird’ shooting and trophy hunting."